Public speaking is like any other area of our lives that comes with the word-of-mouth “wisdom” and ever-changing myths. Myths that are served to us as absolute truths. Those spreading them also believe that they are true.

But is public speaking really more feared than death? It depends. On the one hand, the results of the studies seem to suggest it, but on the other hand, it should be taken into account that the fear of flying, heights, deep waters, etc., are all related to death.

In addition, these days, the list might be slightly different. It should also include terrorism, AIDS, identity theft, and all the things people knew nothing about during the original stury carried out in the US in 1973.

For years, I’ve come across a range of websites dedicated to public speaking or self-help textbooks that claim that “according to a study conducted in the US, people fear public speaking more than death”. I developed so much interest that in 2013 I decided to study the same subject in a part of my master’s thesis.

In today’s blog post, I’ll describe what I was studying and what the results were, in more detail.

Original study carried out in the US in 1973

Dwyer and Davidson (2012) state that on October 7, 1973, the London Sunday Times mentioned it for the first time. The article argued that, according to a study, 41% of Americans reported their worst fear to be public speaking. The short article written by Peter Watson has now been quoted in different textbooks and publications for many years, leading many to believe that people are afraid of public speaking more than death.

Then, the data published in this article appeared in the 1977 book The Book of Lists. One of its chapters entitled 14 Greatest Fears of People listed different things, of which “public speaking in front of a group of people“ was ranked #1 (Dwyer and Davidson , 2012)

The following figure highlights the key aspects of the main fears outlined in this book (Wallechinsky, Wallace & Wallace 1977):

This figure shows the results of the original study: 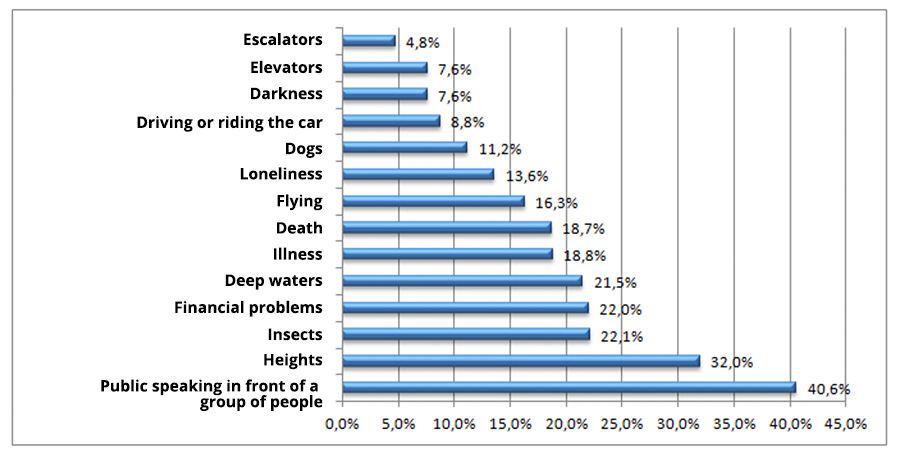 The book explains that 2,543 Americans were asked the same question, “What are you most afraid of?”. They were allowed to write as many answers as they could (Wallechinsky, Wallace & Wallace, 1977). The problem, however, is that the respondents didn’t have a list of fears to choose from, which is why the results of the study are unreliable.

There is no information about the people in the sample

Even worse, there is no information about the people interviewed, and we don’t know who was included in the sample (Berkun, 2009). Similar criticism is also made by Lewis who says that there is no mention of who carried out the study, where the original results were published, how the information was collected, who were the respondents, and which methods were used to collect the responses (Lewis 2008).

Dwyer and Davidson (2012) note that despite extensive quoting very few (if any) specialists have explained the details of the study by R.H. Bruskin Associates. This means that quite a lot of specialists present these data without having deeper knowledge.

Berkun (2009) adds that since the data comes from people who sell their services, such statements about public speaking are often exaggerated or misleading. Presenting public speaking in a similar light helps better market one’s services.

The question was flawed

In addition, Berkun (2009) also gives a comparison on “fear of public speaking vs. fear of death“. Looking at this list, it is clear that the fear of heights (#2), deep waters (#5), illness (#6), and flying (#8) are the things feared primarily because they are associated with death, in one way or another. When combined, death is clearly “fear #1“.

Dwyer and Davidson (2012) bring out a fact as a confirmation of their own that the participants of the study weren’t asked to list the 14 fears in order of importance, but were called and simply asked to name the things they feared.

Based on the data obtained from these phone calls, a list of 14 points with the things named most was drawn up, with “public speaking in front of a group of people“ at the top. However, it’s not possible to call it “the greatest fear of people“ because this question wasn’t asked in this exact form (Dwyer & Davidson, 2012).

Lewis also criticises the method used in the original study, saying that this way, naturally, the first thing that springs to mind is always mentioned, not the greatest fear. In addition, she also says that this list is likely to be significantly different today as in 1973 not much was known of AIDS, SARS, terrorism, and identity theft (Lewis, 2008).

Another similar study (“Is public speaking really more feared than death?”) carried out in the US in 2011

Based on the above, Dwyer and Davidson (2012) conducted their own study, in which 815 students of the Midwestern University participated. The purpose of the study was to either confirm or reject the results obtained by Bruskin in 1973. In this study, people were given multiple answers they had to prioritise. Similarly to the 1973 survey, most people answered that their greatest fear was “public speaking in front of a group of people“.

The exact percentage of respondents was 61%, which is 20% higher as compared to the 1973 study (40.6%). However, when participants were asked to rank three greatest fears in order of importance, 20% of the respondents marked death as the worst fear. Of the respondents, 18.4% marked public speaking and 15%, financial problems as their worst fears (Dwyer & Davidson, 2012).

By doing this in the form of a study, it can be seen that although public speaking in front of a group of people is a major problem for many, marking fears in order of importance indicates that death remains the worst fear.

Based on everything discussed above, I decided to study Estonian people on the same subject in my master’s thesis. To get results, I combined the original study and the Dwyer & Davidson study methods, in which I provided the respondents with a list of 14 elements and asked them to choose their greatest fear. A total of 504 people (381 women and 123 men) responded to the survey.

The results surprised me a bit as I was pretty sure that the fear of public speaking wouldn’t be marked as the greatest. It turned out I was wrong. Have a look at the results in the figure below.

The figure shows that 19.6% (99 people) of the total number of respondents (N = 504) chose “public speaking in front of a group of people“ as their greatest fear. The second place belongs to the fear of “heights“, which was noted as the worst by 15.9% (80 people).

Then, the fear of illness and deep waters were brought out as the worst fears. In view of the purpose of this part of the survey, it should be noted that death came only in the 6th place (9.7%, N = 49). The least feared was driving and riding the car (N = 3 and N = 6 respectively).

As you can see, although with a small (albeit convincing) difference, the fear of “public speaking in front of a group of people“comes first. The fear of death is ranked #5 in this table, feared twice as less as public speaking.

“According to most studies, people’s number one fear is public speaking. Number two is death. Death is number two. Does that sound right? This means to the average person, if you go to a funeral, you’re better off in the casket than doing the eulogy.“

Again, it can be argued that a high number of female participants contributed to the results. Let’s have a look at the results of the study in terms of sex. 21.1% of men marked this answer, and only 19.1% of women. Thus, public speaking proved to be the most popular answer in both sexes, and almost equally.

Different generations and “fear of public speaking vs. fear of death“

In fact, in my master’s thesis, I studied the level of the fear of public speaking, the main causes for its appearance, and the various methods used to alleviate it. The generations were divided as follows:

But is public speaking really more feared than death?

It depends. On the one hand, the results of the study seem to suggest it, but on the other hand, it should be taken into account that the fear of flying, heights, deep waters, etc., are all related to death. In addition, these days, the list might be slightly different. It should also include terrorism, AIDS, identity theft, and all the things people knew nothing about in 1973.

What do you think? Care to share in the comments section below!

What is stage fright? Stage fright is a specific communication-based anxiety resulting in a person experiencing physiological excitement, negative feelings, or certain behavioural responses to the actual or expected act of public speaking (full article here)